As I try to talk and reach out, here is what confronts me so.

I watched with dismay as my friend JP posted so many mean things while she was at the Inauguration.  This is what JP says, and it is challenging to hear:

“A crazy woman from Washington didn’t understand why women could support Trump and I set her straight!”

During the Inauguration JP bragged that Bikers for Trump would lock down DC and using the language of the ALT Right bragged that Chris Cox and his 200,000 strong vigilante crew eat “Snowflakes for Breakfast.”   But she complained about the K Street Protesters and media asserting that their threats of violence was the reason why the Inauguration was not well attended. 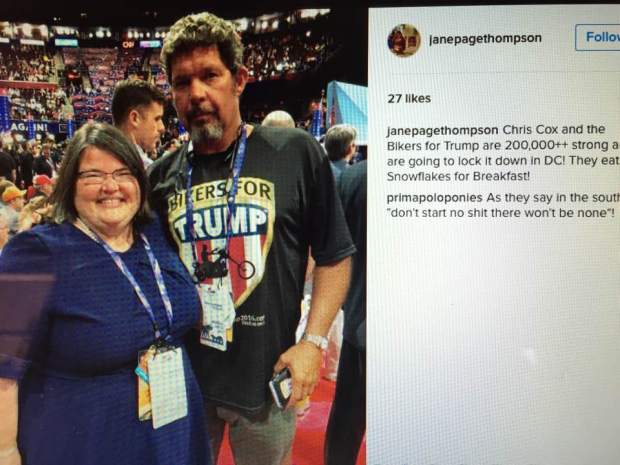 “Message to Woman’s Marchers- Give the next generation of women a head-start in equality and understanding, self-respect and strength of character by sending the girls and young women in your life to a single-sexed high school or college that will teach her what you marched about & for today!”

But then she writes:  “today is also the day when hypocrisy must end; when bias must be cast out and when we look for the good in each other.  People who claim they want unity and respect for women and for this country are marching in protest of a man whom millions of women supported.”  She decided that the best way to bring unity was to glare at protesters.

But who was leading 8 years ago.  Remember when President Obama was delivering a nationally televised speech to Congress a mere 8 1/2 months into his first term, and South Carolina representative, Joe Wilson, shouted out “You Lie!” on live television?   Why was that the new norm?

Not long after, when Republicans regained control of Congress, Mitch McConnell (R)(Ky.), specifically stated that “my number one priority is making sure president Obama’s a one-term president.” He actually said that. In the midst of a financial meltdown, skyrocketing oil prices, terrorism in the middle east, and impending global catastrophe from climate change, the Congressional leadership put “intentionally obstructing the president” as the single most important issue for Congress to address. Whether Mr. McConnell was serious or just being glib doesn’t matter – the message was that Republicans had a deep dislike of Barack Obama and would do everything in their power to undermine his authority.

Don’t forget about the “birther” movement that launched Trump’s political career claiming that Obama was not American -that he was actually born in Kenya, and his birth certificate from Hawaii was forged. Or the constant insistence that Obama is actually a Muslim, despite his clear and unambiguous relationship with Christianity. Or the attempt to label him as a “communist,” although many of his policies are more to the right of Eisenhower, including his bail-out for banks, the auto industry, and the pushing through of his signature Trans-Pacific Partnership – all pro-business, right-of-center endeavors. And while occasionally being referred to as a monkey, or ape, or other racially incendiary comparison to lower level primates.

The language cannot help Americans reunite.  I heard these words over the last three days, and I had to look up what they mean.

Beta:  Alpha males are leaders, like Trump; beta males are portrayed as weak and emasculated.

Crybaby, whiny: Anyone who disagrees with them or their preferred candidate, particularly protesters and people who complain that the alt-right is embracing racism and anti-Semitism.

Human biodiversity: Despite the fact that many say racism is at the heart of its platform, the alt-right is very sensitive about being called racist. They use the term “human biodiversity” as a more scientific-sounding way of referring to issues of race.

Libtard: The alt-right revels in the rejection of “political correctness,” so embracing an outdated term for a person with an intellectual disability (“retard”) serves the purpose of insulting liberals.

Masculinist: A word meant to embody the opposite of feminist, celebrating “manliness” and the traditional “heroic” nature of men. To the alt-right, “masculinist” principles are ones that serve and advocate for men. Critics say they primarily reinforce antiquated gender roles.

Multiculturalism (as a derogatory term): A major component of the alt-right platform is white supremacy and nationalism. “Multiculturalism” is used as a negative term for the blending of multiple cultures, as opposed to celebrating the supposed superiority of Western European culture.

Neoreactionaries: Also known as NRx and the “Dark Enlightenment.” A group of people who call for stripping away anything other than supposedly rational thought, as opposed to a “feelings first” mentality. They advocate for libertarianism, traditional gender roles and neofascism.

Snowflake: Short for “special snowflake,” a pejorative for an entitled person. Most people protesting Trump are “snowflakes,” according to the alt-right, as are anti-Trump celebrities and most liberals.

SJW: Short for “social justice warrior,” this insult is mostly reserved for young women who try to argue on behalf of liberal or feminist ideas.

White genocide: What many alt-right members feel is the natural conclusion of liberalism and pro-immigrant policies.

Please reconcile for me why being American demands upon me and people who believe like I do to turn the other cheek?   We have a President who models escalation; how can American resist division?

I do not have the answers.

Beth Klein is an attorney, leadership trainer and writer. Beth empowers people through the practice of law, seminars and writings. She speaks about kindness, making the world a better place, foreign affairs, technology, treaties, terrorism, and beauty, music, science, and play. In 2018 she is committed to a kinder world, and she "uses her powers for good." View all posts by Beth Klein