Not far from my home, the remains of Phillip Dick rest in Riverside Cemetery in Fort Morgan, Colorado, (section K, block 1, lot 56) where they were buried next to his twin sister Jane.  No crowds come to honor him as they do Jim Morrison at Père Lachaise Cemetery, Paris, France. Ironically, Phillip Dick was one of the world’s most influential writers and thinkers who is deserving of our thanks.

I wanted to write an electronic memorial to him. When you read the names of his works, there is nothing else that needs to be added to describe his contribution to literature through battles with suspicion of propaganda and government, loneliness, drug abuse, depression and schizophrenia.

“My schedule for today lists a six-hour self-accusatory depression.”

“Don’t try to solve serious matters in the middle of the night.”

But, during these days as we watch America being degraded by a president elect, Phillip Dick’s words have even deeper meaning.   In “The Man In The High Castle,” Philip Dick wrote about how people judge competing narratives as true or false in the context of what we already believe is true.

In High Castle, he asks us to imagine a world where Nazi power triumphed in WW2, and a world in which the narrative of history was written by the victor. If we lived in that world, how would we know that the lies spun by a Nazi government were not the truth?  Until we see how stories are used to shape our perceptions and reality, we’re vulnerable to continued manipulation. But once we can think critically about the ways that narratives are constructed, and the various agendas they serve, we can begin to assess objectively our own beliefs.

What is red, what is blue, what is real?

We have now seen how a mass communication disinformation campaign can elevate a Putin Puppet to the highest power in a competing state, and to have millions of supporters simply repeat the mantra.  The context of hatred of a conservative or a liberal view now dominates the common hatred of national threats.

Now, with these manipulations, hating or not listening to a competing political view is more important than working together.  The Machiavellian common enemy which typically binds a nation, has now been turned inward upon the US.  If there is a legacy of the Trump movement, it is simply that.  Trumpism is moving a nation to implode by false narratives that are accepted as reality in the context of the right and wrong of red and blue.

“Today we live in a society in which spurious realities are manufactured by the media, by governments, by big corporations, by religious groups, political groups… So I ask, in my writing, What is real? Because unceasingly we are bombarded with pseudo-realities manufactured by very sophisticated people using very sophisticated electronic mechanisms. I do not distrust their motives; I distrust their power. They have a lot of it. And it is an astonishing power: that of creating whole universes, universes of the mind. I ought to know. I do the same thing.” 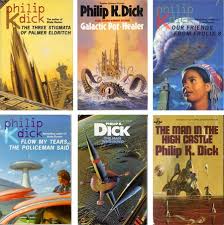 Phillip Dick was a twin, and his sister Jane died in childbirth.  Her death influenced his placement of the protagonist in two simultaneous realities themes in many of his works.

He believed that existence is based on internal human perception, which does not necessarily correspond to external reality; he described himself as “an acoustic pantheist.  After studying metaphysical realms, Dick came to the conclusion that the world is not entirely real and there is no way to confirm whether it is truly there.  He constantly asked the question: “What is an authentic human being?”  And themes of mental illness, religious, medical and recreational drug use, and divine experiences permeate his work.

In 1974 he had a mystical experience that helped calm his horror of the world, and he wanted to communicate the structure of the calm to others in Vast Acting & Living Intelligence Systems (VALIS).  He felt that something intervened to heal his mind and give him a sense of beauty of the world amid the insanity.

“Maybe each human being lives in a unique world, a private world different from those inhabited and experienced by all other humans. . . If reality differs from person to person, can we speak of reality singular, or shouldn’t we really be talking about plural realities? And if there are plural realities, are some more true (more real) than others? What about the world of a schizophrenic? Maybe it’s as real as our world. Maybe we cannot say that we are in touch with reality and he is not, but should instead say, His reality is so different from ours that he can’t explain his to us, and we can’t explain ours to him. The problem, then, is that if subjective worlds are experienced too differently, there occurs a breakdown in communication … and there is the real illness.”

Following Orders was impossible for him as he explains in a 1979 interview.

He found that science fiction gave him the means for true expression, but felt that it became silly putty over time without an identity.

How he measured men was based upon acts, not celebrity or wealth.  My favorite quote is:

Shortly before his death Philip offered a list of his own prognostications to be published in the collection Book of Predictions.  Here’s what he predicted courtesy of the PKD Otaku fan zine, issue number 11.  Fill in the blanks yourself about whether any of these modern day quatrains occurred.

1984
The U.S. will perfect a system by which hydrogen, stored in metal hydrides, will serve as a fuel source, eliminating a need for oil.

1985
By or before this date there will be a titanic nuclear accident either in the U.S.S.R. or in the U.S., resulting in shutting down all nuclear power plants.

1986
Such satellites as HEAO-2 will uncover vast, unsuspected high energy phenomenon in the universe, indicating that there is sufficient mass to collapse the universe back when it has reached its expansion limit.

1993
An artificial life form will be created in a lab, probably in the U.S.S.R., thus reducing our interest in locating life forms on other planets.

1995
Computer use by ordinary citizens (already available in 1980) will transform the public from passive viewers of TV into mentally alert, highly trained, information-processing experts.

2010
Using tachyons (particles that move backward in time) as a carrier, the Soviet Union will attempt to alter the past with scientific information.

Now is the time to question the nature of our reality and to stand in principles broader than making the “other” right or wrong.  Thank you  Phillip for cementing these words in story so that perhaps people will create something together rather than invest billions of dollars to destroy capable leaders and ourselves with words and binary codes.

Beth Klein is an attorney, leadership trainer and writer. Beth empowers people through the practice of law, seminars and writings. She speaks about kindness, making the world a better place, foreign affairs, technology, treaties, terrorism, and beauty, music, science, and play. In 2018 she is committed to a kinder world, and she "uses her powers for good." View all posts by Beth Klein